Of mountains and railways…

So, what’s with the title Dave? Well, it’s sort of a play on the Steinbeck novel “Of Mice and Men,” which I haven’t read by the way. I don’t really read much outside of history (go figure), mostly because I don’t have time to with all the other stuff I need to read. Anyway, I was stuck for a title and that just popped into my head. I think it’s appropriate though; just as Of Mice and Men was based on Steinbeck’s experiences, this blog was talks about my past week. So, there is a decent explanation!

Well, since I have now opened the proverbial can of worms, I guess I should elaborate on the events of the past seven days. It did take me a few days to get back in the swing of things after returning to work, and I was certainly feeling drained by Friday. I was struggling to clear up that backlog of marking, which by the way I’m still not all the way through (I can see the light at the end of the tunnel though). Saturday was our second cross-country ski lesson, which was a bit more active than the first. The kids got to experience going down a hill, and so did Dad! However, going back up the hill was interesting, especially since I didn’t have poles to help me out. My glutes were feeling it a bit later that day. 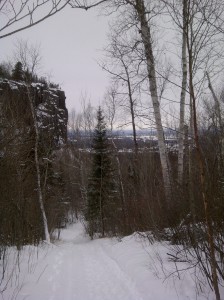 Sunday afternoon found me and boys back on the trail up the mountain, determined to surpass last week’s distance. So we headed up another level on the mountain, which unfortunately has some tough sections. One area, which is too rough and narrow for snowmobiles (most of the trails are used by both hikers and snowmobilers), includes a 250 foot vertical rise in 1100 feet. That’s a thigh-crushing, hamstring-tightening, lung-popping 23% grade…how’s that for a description! Trying to get two little boys up that is not easy, nor is the fact that I could stand to lose 10 pounds and am somewhat out of shape. However, the view makes it all worth it, as does the time I get to spend with my sons. I really hope they grow up to appreciate and enjoy the outdoors as much as I do. I’m already mentally planning where I’d like to take them on my personal day in June…Leeblain comes to mind 🙂

As for railway related events, I did not get to the article as I expected to (I wasn’t holding out a lot of hope). However, there were some interesting developments. On Wednesday I received an email from the Chik-Wauk Museum, which is located at the end of the Gunflint Trail (just across the border in northeastern Minnesota in case anyone is wondering). They wanted to know if I was interested in doing a presentation there at some point in the summer; of course I said “yes.” It’s been quite a few years since I done a public lecture, probably dating back to 2000. In a four-year span I gave a series of presentations on the railway (twice), mining and logging at the Paipoonge Museum (now known as the Duke Hunt Museum). There is no date yet, but hopefully I will know by the end of March. I must say that I’m excited; it love to talk about the railway and I know there will be a receptive audience. I also relish the opportunity to bring a little Canadiana to our neighbours to the south and describe how closely related our histories often are.

My second development was another contact in the ongoing Alexander McEwen saga. I received an email from a kind lady across the pond in Britain, who as it turns out is the great-granddaughter of McEwen’s mistress. Wow, quite the interesting tidbit! While she was not able to offer any additional information, it is another piece of the puzzle and might help me get to my goal of finding a picture of him.

Digging through my files for his information led me to a few other things on the weekend. First I continued with my article filing that I mentioned in my previous post, which unfortunately I did not get entirely through (damn US railroads!). From that I spun into looking at the book chapters and a new chapter I added regarding the sale of the railway in 1898-99. As I looked at the file, I really wished I could get to Toronto sometime in the near future. There is a file at the Archives of Ontario on the sale of the railway that has some really important information (I looked at it in 1999, but I need a second go-around). In the meantime I think I will email the archives at CIBC to see if they have any documents related to the money loaned to the railway in 1890 and how it factored into the sale. Wow, I have some work to do, never mind working on the article!

Posted by Padwrr on January 16, 2012 in Hiking, Miscellaneous, Research, Writing

Ugh, back to work!

That pretty much says it all…the vacation is over! Two weeks flies by quick, though I shouldn’t complain since many other people don’t get time off over Christmas. It is tough to go back though; the first couple days are always exhausting. I never sleep well on the last night which leaves me half-asleep and since I don’t drink coffee (I can’t stand the taste or smell of it), it makes for an interesting experience. You really need every ounce of energy since teaching can be mentally challenging, so I did flub a lot of things in my sleep-induced stupor.

The only drawback of my holiday was the pile of marking that I procrastinated about and only managed to get through a small amount of. Sort of makes me wonder how beneficial the two weeks off really is, though the stress relief is very necessary. The visit to Duluth was great, and I was able to do a few other things as well. This year my wife and I signed the boys up for cross-country skiing. I have not cross-country skied since I was 11 or 12, so it’s an interesting experience. We bought some used equipment at the fall ski-swap and filled in the missing pieces after Christmas. Saturday was the first lesson at Kamview and I didn’t even get into my skis as I spent my time keeping the boys on their feet. I think they are enjoying it, which is great since it’s a terrific family activity. I also need to exercise so I can lose a few pounds!

Speaking of winter activities, I was also able to make my first hike up the mountain last week. I live close to the Nor’Wester Mountains and there are many trails on the mountains that can be accessed from the end of my street. Three years ago I began taking my oldest son Ethan up the mountain on the toboggan as a way to exercise and have some father-son time. I’ve been doing it every winter since, however now I also have my youngest Noah as well, which makes pulling a nearly 100 pound sled very interesting (Ethan walks the hills). We did 5k, not bad for the first time out; maybe this week we’ll push it up to 6 or 7k.

On the railway front, things have been progressing, albeit slowly. I did make it to the library last week to get a few articles that I needed and boy have things changed since the last time I did that. Well, I guess it’s been about 14 years since I’ve looked at a roll of microfilm so I guess it can be expected. Now things have moved into the digital age with computer-run scanners that can save images to .pdf. Too bad I didn’t bring a flash drive! I’ll have to remember that for the next time. At some point in the future I’m going to have to spend some time going through newspapers again, since I need to find articles from roughly 1900 to 1938. To compound things, since this town used to be two cities, there are two newspapers worth to look through!

I spent some time at home printing out articles I had saved and neglected to make hard copies for my files, and subsequently attempting the file them with varying degrees of success (there’s still a bunch in the “to be filed” stack). I also decided to take my plan to Facebook/Tweet important events about the railway to the next level. I set up a Google Calendar where I can input dates (there is a page on this site as well); all I need to is figure out how to post those dates automatically, which is proving to be a bit of a chore. Stymied by technology!

So I’m hoping by the end of the week to resume writing the article, though that is contingent on me clearing up that backlog of marking. Maybe by next week’s ramble I’ll have some news to report.

Posted by Padwrr on January 9, 2012 in Hiking, Miscellaneous, Research, Writing