The Alberta Clipper Strikes Back!

So I awoke this morning to a winter wonderland. We had the pleasure of being hit by an Alberta Clipper yesterday, which is a very fast-moving weather system that packs quite the punch (follow the link if you don’t trust me). The clipper apparently dumped 32cm snow according to the media, which unfortunately was not enough to close the schools. The trend lately is to cancel the busing, but leave the schools open. The side effect, in high schools at least, is that hardly anyone shows up.

So after clearing a path at the end of the driveway to get out, I drove to work with the truck in 4×4 (always fun). I had a meeting for part of the morning at 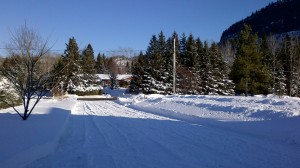 the board office, but then I spent the rest of the day marking. I guess that was okay, but I would have rather been at home. There’s still hope though; forecasts are calling for another possible dump in a few days. Maybe they’ll call in the army like they did in Toronto in 1999!

Now in case you’re wondering (again) why the title, I was trying to think of something clever to do with the weather. This weekend my boys watched a couple of Star Wars movies while my wife and I worked on the basement and it just popped into my head. Now speaking of the basement, there was no trip up the mountain this weekend because we finally got around to installing the laminate floor. Jo-Anne and I started this basement reno (really a completion since we didn’t have it finished when we built the house) in 2009 and we’re now approaching the end. All that is left after this is the baseboard and trim around the windows (in the rec room only-office needs furniture and the bathroom is unfinished).

I’d never installed laminate floor before, so this was quite the learning experience. It took us almost 3 hours on Saturday just to get the pad down, but once that was done things moved fairly quickly. There were lots of cuts to make, especially angled cuts, which was a bit tedious. My wife really flexed her handy-lady skills, laying the boards while I did the cutting. We managed to get the rec room done by last night; now we just have to do the office and stairs and the floor is in. The only downside of this whole process is that I am extremely sore today-I guess I used a lot of muscles that I don’t normally do. The hour of snow blowing after school didn’t loosen them up either!

You would think that with all of these things going on that there was very little railway work, but I did manage to make time for that too. I spent a few hours working on the article in the middle of the week and I made good headway. I am now up to 1300 words, which is more than halfway through my portion of the article. It’s also a perfect spot, since it gives me a lot of room to write about the building of railway. There is still the struggle about what to include and what to leave out, but I am feeling a lot better regarding the directions things are headed in. In the end this process will give me some excellent experience writing for a historical audience and maybe it will lead to more opportunities in the future.

I’m hoping to have a rough draft ready for Lee to take a look at in a few weeks as I know that I will be busy as spring approaches. The calendar tells me that I depart with the students for Europe and Vimy Ridge in 36 days. It’s hard to believe that the date is so close; I think that I am on top of everything but I still feel apprehensive. My jitters probably stem from my lack of experience and that I want to make sure everything is done properly. I did decide that I would like to take my Playbook with me so I can blog along the way; almost like a travelling journal (Playbook OS 2.0 is pretty awesome btw). I’ll be sure to confirm if the tablet will make the trip for sure before I leave. I definitely will have my phone with me so I can post to my Twitter wherever we are ( @Padwrr ).

With my limited time I also accomplished my usual spat of research, probing whatever ideas jumped into my head. This week it was information about efforts to link the railway to Duluth during the Canadian Northern years prior to WWI. I also dug-up a few articles on the planned reconstruction of the abandoned rail line to the Paulson Mine in 1921. It seems as though there is always something new to discover. What will this week hold?

Anyway, guess I should wrap things up. Until next week…

Posted by Padwrr on February 27, 2012 in Miscellaneous, Research, Writing